The History Of Automotive Paint

"Every customer can have their car painted in any color, as long as the color they want is black."  (https://www.henry-ford.net/) was Henry Ford's answer to his customers' requests for more colorful colors.

Automobiles are an expression of the zeitgeist - this is particularly true to colors. From pure identifying features in racing to the colorful 1970s to the classic 2020s or the golden bolides of the athletes - whatever you like is allowed.

The color is an important reson to buy a classic car and the manufacturers know that only too well. When we look at a classic car, at the first glance we see neither the engine nor the power, and the torque and interior fittings are also hidden from us. But what first catches the eye are shape and color.

More than anything else, the vehicle paint determines how we perceive an automobile. Sporty or noble, eye-catching or subtle, technically sober or opulent - many attributes are expressed in the paint at the very first moment.

At the beginning of automotive history, the range of offered colors was very limited. In order to achieve the most efficient mass production possible, it was necessary to dispense with complex painting processes. It should be done as quickly as possible, also with the painting, and this was made possible by the nitro lacquer, which was provided with black or other very dark pigments and had particularly favorable drying properties. Until the end of the 1930s, all manufacturers therefore offered only a few paints in red, blue and green.

Some automobile manufacturers did not paint their vehicles at all. The reason for this were the wooden bodies, which were very dificult to paint. Since wood works, the lacquer surfaces would have cracked quickly. Therefore, it was decided to replace the vehicle paint with a cover made of artificial leather. The leather was also available in different colors, and it allowed the production to be carried out quickly and without corresponding drying phases.

The luxurious solution such as the “fish silver” lacquer was not the original “fish silver” used in the 1920s, where the silvery inside of the fish scales was isolated and added as a pigment to the lacquer. To produce 250 grams real fish silver, a ton of fish is needed, so this valuable material was only used to a very limited extent. The “fish silver paints” were the first variants of the metallic paints in which a metallic sheen was created by adding aluminum chips. At the beginning of this lacquer solution, the customer could choose between seven fish silver colors, such as blue, green or light purple.

Technical advances in the late 1930s made it possible to offer expanded color palettes. The newly developed urea and melamine resins yellowed less than the nitro lacquers and also enabled lighter tones to be used fot stove enamelling.

Two-tone was also an issue at this time: in the 1930s, it was a relic from the time when the majority of the bodywork was not manufactured in the factory but by external bodywork-workshops. The customer could choose the color of his body, but the remaining parts painted by the vehicle manufacturer were excluded from this choice. This color distribution was also maintained when a large part of the bodies was already being produced in the factory and also painted there. That is why, of course, only at the customer's request, many automobiles were often deliberately painted in two colors. The best-known division was the so-called "saddle painting". The roof, the edges of the windows and the upper part of the bonnet were optically contrasted with the rest of the vehicle body, mostly darker.

At the beginning of the 1950s, taxis in Germany were black, and buyers preferred muted tones such as dark blue and green as well as black or white and light gray silver colors, which were popular for reasons of road safety. A short time later, a trend towards two-tone painting set in, which lasted into the 1960s. In most cases, a muted color was combined with a clear color, for example was the roof set off in color.

After a while, problems arose with the clear lacquers: They often bleached out and lost their shine. This is how the pastel colors were discovered, and at the beginning of the 1960s, many vehicles shone in light blue or yellow tones. At that time, these could also be found in other areas, such as in kitchen cabinets or on porcelain. Little by little, bright, friendly and strong colors conquered the streetscape, although white, ivory or cream paintwork still dominated the streets until the end of the 1960s. Easily recognizable by ths Mercedes-Benz 190 SL Roadster, which was restored in our company:

It was completely different in America: in the 1960s, young Americans were bored of the factory paintwork and therefore grabbed the spray gun themselves. They implemented their own color ideas, influenced by advertising and young fashion, and evoked such a great response that the industry picked up on the trend and adapted their series finishes. The early 1960s were also the time for modern metallic paintwork.

The 1973/74 energy crises brought about a real car boom in 1977, when metallic paintwork achieved a market share of more then 30 percent for the first time, bringing new shades to the streets on a larger scale. More than half of all cars wore a more conspicious color. These included combinations that a few years later hardly met with acceptance, such as the colors brown and beige (in 1977 the third most popular shade after red and green). But it was not just fashion that influenced the choice of colors for cars - there was also a new rule of thumb: the smaller the car, the more colorful and brighter the color.

During various automobile exhibitions at the beginning of the 1980s, the colorful years were over, especially in Germany. Only a few individualists wanted to attract attention with their car. The great mass relied on inconspicuousness. The proportion of the color gray for new registrations grew from 12% in 1980 to 19,2% in 1987.

Green and yellow, on the other hand, lost significantly over the same period. However, red remained popular: the constant attention grew with the car races: Count Eliot Morris Zborowski came up with the idea of painting vehicles according to a color code that could be assigned to the driver's country of origin. The aim behind this was to make it easier for spectators to distinguish which pilot was placed where. In 1900 these color rules were used for the first time on the route from Paris during the Gordon Bennet Cup.

At the beginning of 1990, hardly anything changed in terms of color technology - inconspicous colored laquers dominate and move in the color family of earth tones and are still popular up to the classic 2020s. However, designers are constantly developing new coatings that follow the respective fashion waves. Customers can not only choose from a wide range of colors, but also from various surfaces. This gives customers the option of choosing the matt lacquer in addition to plain, metallic and pearl effect lacquers.

The greater change is evident in the painting processes and artificial intelligence: painting robots order paint independently, warehouses manage themselves completely, customers and suppliers are networked.

Classic car paints today an what history means for us

Even today, the paintwork is not an insignificant issue in classic car restoration. Various criteria determine the approach:

For example, when it comes to the classic car-configuration, we attach great importance to configuring the desired classic "matching colors" as much as possible. This means that we paint the vehicle in the same DB color as it was delivered by Mercedes-Benz at the time - if the customer wishes so. This information can be found on the Mercedes-Benz data card. However, if a different color is required, we recommend choosing a DB paint that was common for the model range at the time. As already described, the paint has continuously developed - which is why the model series have been available in different colors over the years. For example, paints that were common for a Mercedes-Benz 280 SL Pagoda at the time were only used in part on the previous Mercedes-Benz 190 SL series. The "color selection" factor is relevant for maintaining and increasing the value. However, this should not represent a limitation of the design options and is of course only a recommendation - we are pleased to fulfill the desires of our customers unconditionally. 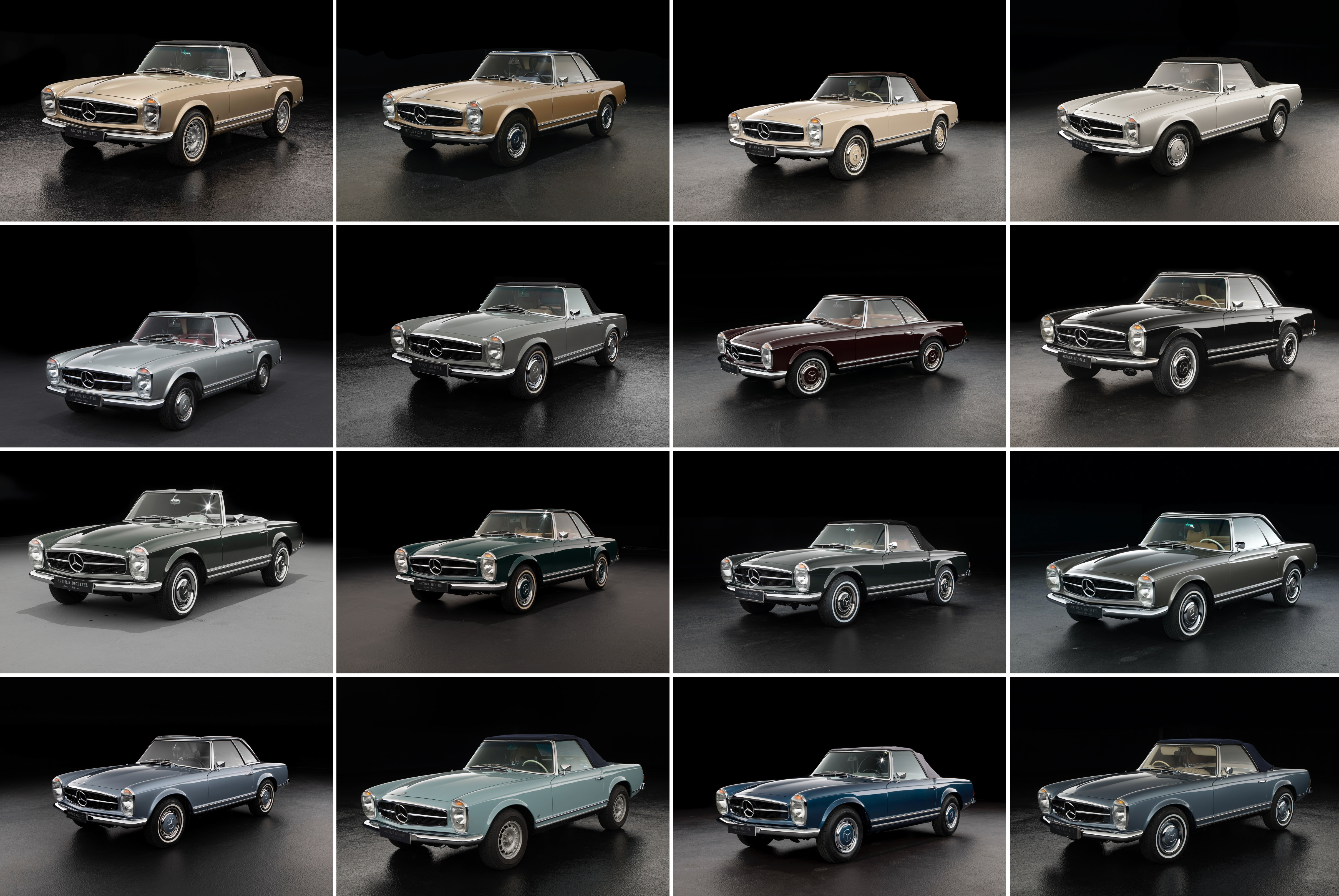 In addition to the selection of the paint, the professional classic car paintwork is also a decisive aspect for the end result. In our factory, we paint classic cars according to today's quality standards. This means thorough preparation of the substrate, professional priming and the paint build-up using a filler, basecoat and clearcoat. Every step is carried out with the highest degree of thoroughness in order to optimally protect the paintwork from "everyday" paintwork damage, paintwork effects (such as UV rays, dirt, other environmental influences, etc.) and corrosion. In terms of durability, the finished paint can undoubtedly be compared with the paint on a new car.

Find an article from our series #makeovermonday about the professional classic car paintwork here.

In addition to our vehicle portfolio, we offer you the option of an individual restoration in which you can configure your dream classic according to your wishes. We look forward to hearing from you by phone +49 7031 3069522, via WhatsApp, E-Mail or Instagram.