Nitribitt and the Mercedes-Benz 190 SL

There are some vehicles, which attained fame by means of their owner’s tragedy. These stories are still omnipresent even today after more than 50 years. The Porsche 550 Spyder became one of the most striking examples when the talented James Dean was killed during a drive. And then, in 1957, there was the murder of Rosemarie Nitribitt: a misdemeanour, unexplained to this date. Her name is directly associated with the Mercedes-Benz 190 SL especially among the older generation in the collective memory. “Wasn’t that the car of that Nitribitt?”, elderly gentlemen usually utter with a mischievous smile when they look at one of the 190 SLs of our vehicle presentation. Correct – Nitribitt’s car! What is that story – the source of so many legends – all about?

On 1 November 1957, the Frankfurt Police entered Rosemarie Nitribitt’s luxurious apartment. The officers discovered the body of the high-class prostitute. Her skull was smashed and she had strangulation marks on her neck. The murder is said to have taken place three days earlier. However, later on, investigators questioned this body of evidence. Furthermore, DM 30,000, valuable jewellery and one mink coat were missing.

Who was “that girl Nitribitt”? She came from humble beginnings. She was the oldest of three daughters growing up without a father, even though each girl had a different father. She was physically abused, locked away, and mistreated. She was always a rebellious and rather aggressive girl. Therefore, she came to increasingly strict borstal schools, from where she ran away again and again. Then, she came to foster parents. At the age of 11, she was raped by an 18-year-old boy; at the age of 14, she already had an abortion. Even in her younger days, she had many relationships. At some point, she even began to have sex for money and other payments. Eventually at the age of 20, she moved to Frankfurt.

Within four years, Rosemarie Nitribitt managed to become one of the top prostitutes there. As of 1956, the high-class prostitute drove around in her legendary Mercedes-Benz 190 SL in order to look for potential clients. With regards to the conditions at that time, she resided in a hypermodern apartment house, began to learn languages and tried to acquire the demeanour of a lady of high, social prestige. And she was successful – very successful! Soon, high-ranking personalities from the sectors of politics, industry and sports became her client base adoring her with devotion. Among them were, for instance, offspring of the industrial clan Quant or Bohlen und Halbach. Love letters by Harald von Bohlen und Halbach, which he wrote for his “foal”, were published decades after her death.

The murder of “the demimondaine from Frankfurt” was regarded as a huge scandal in the prudish post-war Germany of the Adenauer era. The press was concerned with this topic for weeks. The magazine Quick offered – believe it or not – DM 50,000 for the capture of the perpetrator. Just imagine! In the fifties, one could build a luxurious single-family house for this amount. However, the amount has never been paid off. Apparently, the police and the judiciary have never liked to know who murdered Rosemarie Nitribitt. Relevant authorities investigated sloppily; notebooks with client addresses and incriminating documents from the case-file mysteriously disappeared. Despite of 500 testimonies and 5,000 case-file pages, investigation came to nothing. There was apparently a range of famous personalities, who were strongly interested in keeping their names hidden. None of the speculations could have been clearly proven. To this date, people assume that huge amounts of (hush) money were involved in that scandal. One prime suspect, a close friend of Nitribitt, was accused of murder after three years of her death. However, he was acquitted finally for lack of evidence.

Additional films were produced and until recently, books have been written about the mysterious and mesmerising story of Rosemarie Nitribitt. To this date, Rosemarie’s skull is regarded as the brilliant piece of the exhibition about her life. This shows the bizarre fascination about this memorable topic. 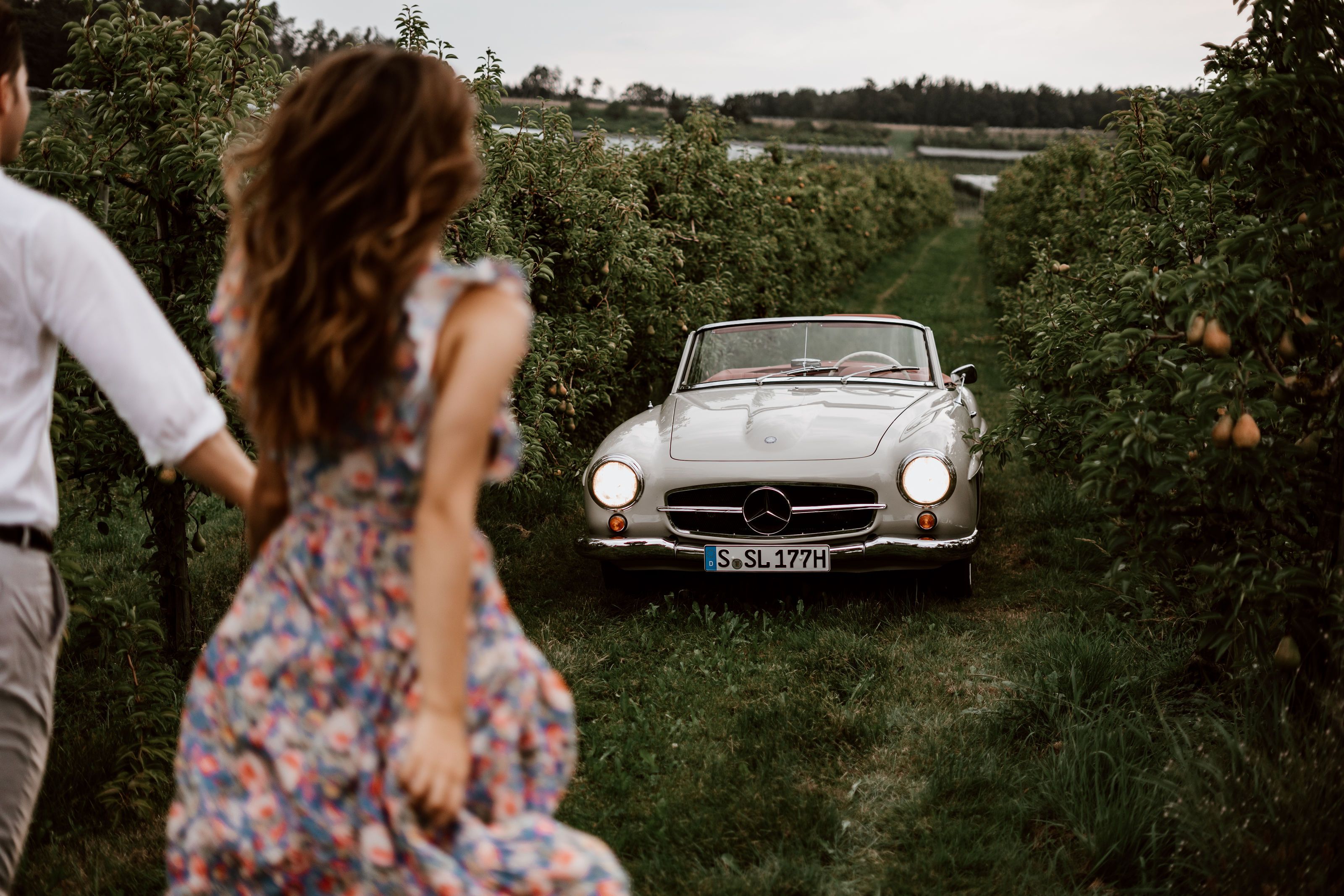 However, what how did the Mercedes-Benz 190 SL become famous? Rosemarie had turned the mileage up to 42,000 km within only one and a half years. She purchased the new vehicle at the Mercedes-Benz branch in Frankfurt. The car with black paint and a red leather interior was registered by her in May 1956. After her death, her mother became her sole heir. Therefore, she disposed over the SL, which she sold to a second-hand vehicle dealer in Düsseldorf for DM 12,000. The dealer resold the car to a shipping company specialist in Hamburg for DM 13,300. This man had an accident with the car; he passed on the car to another second-hand vehicle dealer, who resold the car as well to a filling station owner for DM 8,500. The owner had the car repaired. This time, it was painted in silver-grey and people assume that the car was once more sold to somebody else. However, this is when the traces of Nitribitt’s SL disappear until the following used vehicles ad appeared in the magazine auto-motor-sport in January 1970:

However, a potential purchaser could not be found. The last piece of information tells that the 190 SL was sighted on a scrap yard in Munich in 1975. And then, there is a last-ditch anecdote about the car: in an interview “bei Beckmann” (“at Beckmann”), designer Karl Lagerfeld reported that he was once the owner of Nitribitt’s car a few years ago. However, he had an accident with that car. This is allegedly the reason why he nevermore stepped on the accelerator pedal again.

Furthermore, shortly before her death, Rosemarie Nitribitt was already negotiating with a Mercedes-Benz salesman because she wanted to exchange her 190 SL for a new Mercedes 300 S Coupe. In the past, her clients had complained that it was uncomfortable to get into the car!

If this could be transferred into a current dilemma, this would mean that a prostitute at the age of 24, coming from the poorest of circumstances, intends to buy a Maybach. >